On 31st of August the Indian media which included news channels like Aaj Tak, India Today, Times Now, ABP news, News X and several digital news media websites like Swaraj India did special broadcasts and wrote articles claiming that they found evidence of the death of Chinese soldier’s of PLA (Peoples Liberation Army) of China after clash between Indian and Chinese army which took place in Gakwan valley on 15th of June. These reports were presented as Breaking News.

News channels broadcast aired images and visuals of a Chinese Army burial ground for martyrs and these visuals were projected as a proof claiming that the graves show “Proof of Chinese casualties”. Aaj Tak claimed that 40 PLA soldiers died in the Galwan clashes, India Today did not make a verbal claim on the death toll yet ran images of the cemetery as “proof of massive casualty”. An infographic aired during the show suggested that the cemetery has 105 graves.

Times Now carried images from the same Kangxiwa war memorial claiming that “India already had evidence of 35 casualties on the Chinese side, but these pictures now prove that there have been more than 35 deaths.” While NewsX and ABP news also broadcasted shows where they claimed over 30 graves of Chinese soldiers who died in Galwan clashes were discovered.

Aaj Tak claimed to have obtained ‘exclusive’ imagery that proves “40 PLA soldiers” were killed in the cross-border skirmish. In a show anchored by Rohit Sardana this claim was made. He said “Here is the proof of the clashes in Galwan which caused Chinese casualties. These photos are graves of the Galwan casualties. The channel then aired visuals of soldiers walking towards a memorial, an aerial view of graves and a Chinese soldier wiping a tombstone. Then the visuals below were aired.

ABP news claimed that the graveyard had 35 graves of Chinese soldier’s in their broadcast.

Times Now carried images from the same Kangxiwa war memorial claiming that “India already had evidence of 35 casualties on the Chinese side, but these pictures now prove that there have been more than 35 deaths”. They also claimed that “Photos of 106 PLA tombstones reveal [the] extent of Chinese casualties in June 15 Galwan clash.” The channel further wrote in a tweet, “PM Modi was right about Galwan grit, pro-China lobby ‘doubted’ India.”

#Breaking | 47 days later after the Galwan Valley clash, proof of PLA casualties is finally out. Pictures of graves of Chinese soldiers killed in the clash are going viral on social media. These pictures prove that our braves took down more than 35 Chinese soldiers. pic.twitter.com/rBRbrLdpEX

Viral posts and tweets on twitter with similar claims got hundreds of retweets and likes.

This is a big blow to China & Congress pic.twitter.com/3ecplYSL6L

Tombstone says, “Tomb of Chen Xiangro. He was sacrificed in the struggle against India's border troops in June 2020…”

The photographs and visuals are of the Chinese military cemetery in Kangxiwa town that contains graves of PLA soldiers martyred in the 1962 Indian-Sino war and not of the soldier’s that died in Galwan clash.

It was found out that the video aired by Aaj Tak, the images used by Times Now, and the viral photos of tombstones are from the same site – Kangxiwa war memorial in Xinjiang province. Official data which was found as released by the PLA said there were 107 graves in 2019 and we further found that a soldier who died in 2019 was buried at the same site, taking the official count to 108. A document uploaded on the website of the Chinese Defence Ministry in April 2020 had put the total number of martyrs buried in Kangxiwa war memorial at 108. The military face-off between Indian and Chinese troops in Galwan reportedly took place in May-June.

The source of the photographs and videos aired by news channels which were also shared on social media platforms were found by searching keywords in mandarin on Chinese search engines and video sharing platforms. The video aired by Aaj Tak was also found on BiliBili – a Chinese video-sharing site.

On August 24, the Chinese military by a channel named CCTV had shared a video of their visit to the war memorial on the micro-blogging website Weibo. The same video can also be watched on Chinese video-sharing platform Bilibili. 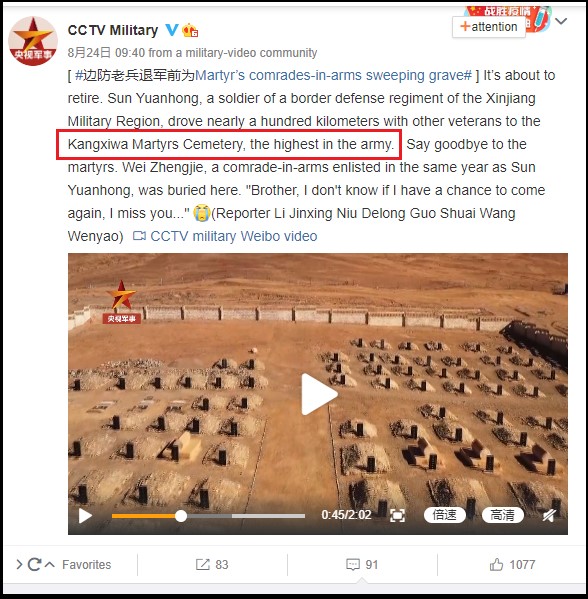 Here is a screenshot from the video found on Chinese social media site Weibo. The graves of the chinese soldier’s are clearly visible.

Transcription of the video using google translate described how soldiers of the Chinese army who were about to retire were visiting the Kangxiwa Memorial to pay their respects to the veterans. Some of the translated lines read, “For a long time, the border defense regiment of the Xinjiang Military Region has a tradition where they had to visit Kangxiwa Martyrs Cemetery Road before retiring.” The soldier says, “Siwa Martyrs Cemetery is the highest cemetery for surviving soldiers. 108 soldiers who died from the country were buried. Looking at the snowy mountains in the distance, the veterans also thought of their comrades in arms.”

A search for Kangxiwa War Memorial on the Chinese search engine – Baidu showed a page with details about the Memorial, with reference to news articles. According to the pages, Kangxiwa memorial was built in the Xinjiang province as a tribute to the soldiers who lost their lives in the Sino-India war.

IDENTIFICATION OF TOTAL NUMBER OF GRAVES AT KANGXIWA

The Google Earth photo aired by India Today and Aaj Tak dates back to 2011.

India Today had used the same map in a report published on August 29 which mentioned that it is from 2011.

A photograph of the cemetery which is viral on social media was found using Chinese search engine Baidu. It dates back to 2011 and clearly shows 43 graves on the left side. The last row (marked in red) contains only one grave.

The Weibo video we mentioned earlier shows two graves on the left sides.  Here, the last row on the left has two graves (marked in red). It’s unclear when the new grave was built, however, it was certainly dug up after 2011. Thus bringing up the total number of graves to 44 on the left side of the memorial.

Another image of the cemetery circulating on social media gives a clear view of 63 graves on the right. This image is also fairly recent as the last row on the left has two graves (marked in red circle). But again referring the CCTV video which was uploaded on Weibo by Chinese Army on 24th August we see something different.

A document uploaded on the website of the Chinese Defence Ministry in April 2020 had put the total number of martyrs buried in Kangxiwa war memorial at 108. The military face-off between Indian and Chinese troops in Galwan reportedly took place in May-June. Thus the imagery aired by Aaj Tak and India Today cannot represent graves of Chinese soldiers martyred in these clashes.

In fact, it was found another picture aired by India Today which dates back to at least December 2019. This picture was uploaded on Chinese question and answer website zhihu.com akin to quora.com. The date can be seen at the bottom of the article.

Viral Photo of the grave of a Chinese Soldier which did not mention Galwan but has been dug up recently.

India Today used a satellite image from 2011 to report on Chinese casualties in the Galwan clashes. The pictures aired by India Today, Aaj Tak and Times Now show the memorial in Kangxiwa that contains graves of Chinese soldiers who died in the 1962 war with India. Another picture of a grave that appears to have been recently built is floating online. However, we were unable to confirm the details of this grave.

An edited image with false quote of Yogi Adityanath is viral.

A concept design created a decade ago for New Delhi station is viral as Ayodhya Railway Station.