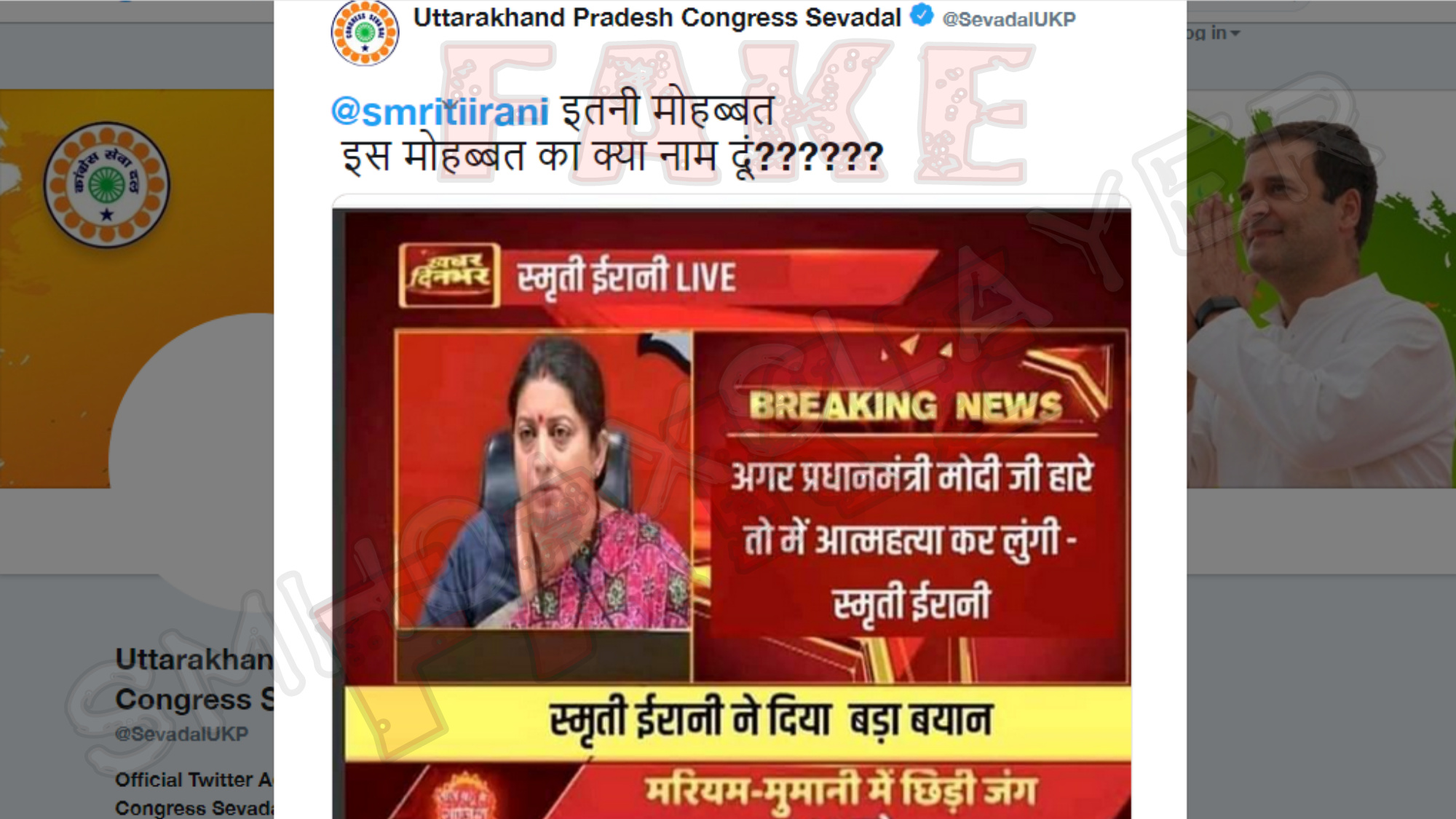 An image is viral on Social Media with a claim that Union textile minister Mrs Smriti Irani has said that ” She will commit suicide if Prime Minister Narendra Modi looses Lok Sabha polls.”

Translation: “What should I name this love ????” 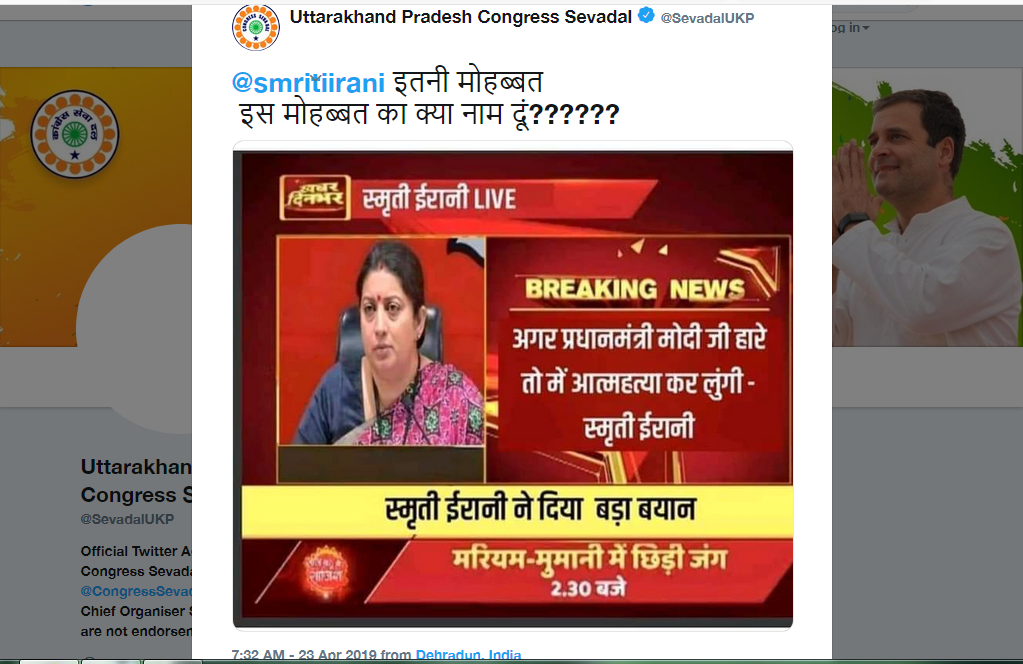 He has been caught spreading Fake news earlier.

A Facebook page India Resists also posted the same image with a claim “Rohit Vemula’s suicide was an institutional murder .

Rohith Vemula's sucide was an institutional murder. Bhakts mocked about it, and now Irani is threatening suicide.

SMHoaxSlayer ran a simple google search and found that no such news appeared where Irani is claiming that “she will commit suicide if Modi looses Lok Sabha election” .

And it’s obvious that a minister with such stature, if the statement ia true, this news should have been on every credible news media which it wasn’t. It was only on Social media.

The image has been edited, with text and image replaced from the usual ABP News template, in this case “Khabar Dinbhar”

The right one with Shivraj Chauhan is genuine and you can see the similarities highlighted in yellow boundaries. Hindi fonts in the fake left image is also different from the genuine ones which ABP news use. 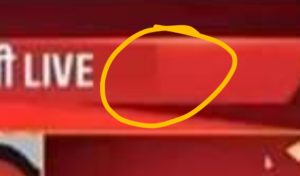 Fake TV screenshot with a quote by Sambit Patra which he never actually said.

The Google search leads us to an article written by NDTV where it was mentioned that Irani has said in February 2019 at an event in Pune she said ” Will quit politics the day PM Modi hangs his boots.”

“Union minister Smriti Irani on Sunday said she would leave politics the day Prime Minister Narendra Modi decided to hang his boots, though she asserted that he would be around for “long years”.

She was speaking at the Words Count festival in Pune for a discussion titled ”Scripting Her Story, From Star to Star Campaigner”.

A member of the audience asked her when would one see her as a “pradhan sevak” (prime servant), a title often used by PM Modi to describe his role as the head of the Union government.

“Never. I entered politics to work under charismatic leaders. I was very lucky to work under the leadership of late Atal Bihari Vajpayee and I am currently serving under Modi ji,” Smriti Irani replied.

“The day ”pradhan sevak” Narendra Modi decides to hang his boots, I will also leave Indian politics,” she said.

“I decide for myself how much of my life I will give for my country, my society. In an independent country, if I cannot take a decision for myself, what is the use of that independence?” she said.”

SMHoaxSlayer also delved deeper and found an Youtube video where Irani was addressing the press in the month of March, 2019 . In this press conference Irani accused Congress president Rahul Gandhi of his involvement in the land scam with Robert Vadra . ABP news template has been used to project the fake claim of Mrs Irani.
It was found that the template that was used to project the fake claim is similar to the template used by ABP news to cover the press conference of Smriti Irani where she is projecting the land scam of Rahul Gandhi.
Here is the link of Smriti Irani’s press conference covered by ABP News. 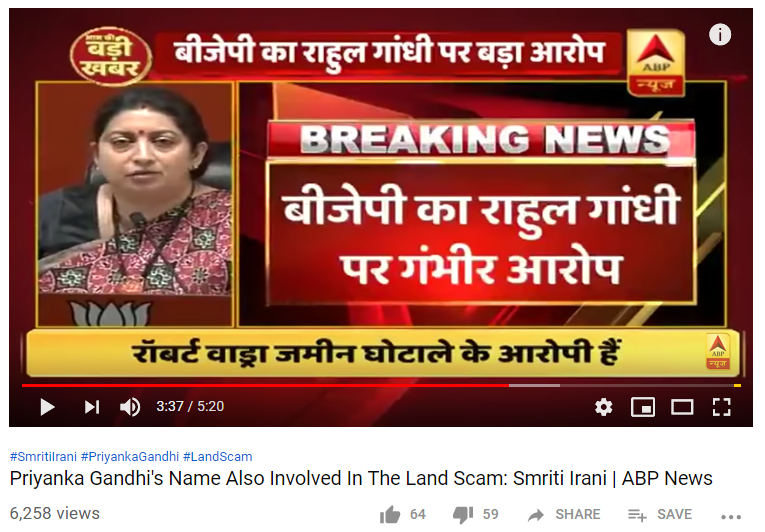 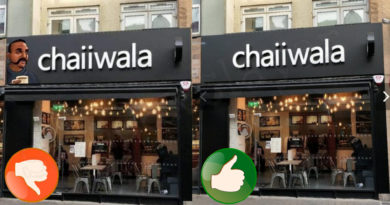 No, Chaiiwala signboard does not have Abhinandan’s face painted on it.

Did CPI hang a decapitated Cow Head in public ? Photoshop is not for spreading Hatred ! 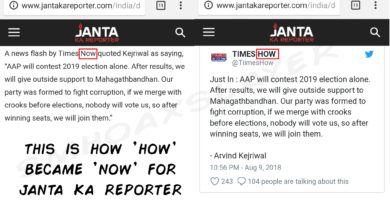