A Photo is viral showing Police is beating RSS volunteers falsely claiming that RSS volunteers were misbehaving with the flood victims inhumanely and were stealing their stuff which is completely false.

Posted by Priyanka Gandhi – Future Of India on Friday, August 24, 2018

The same photo was also viral 3 years ago, December 2015 where Chennai fell victim of floods too. It was claimed to be from Chennai then with the same false story with ABP News Channel Logo added to it digitally trying to give it credibility. Then it falsely said “RSS volunteers are caught stealing jewellery under the pretext of helping flood victims”

That was also debunked by SMHoaxSlayer then i.e Dec 2015

HOAX-this is being widely spread on FB.TRUTH-No link given, neither found on ABP site, reported to them. fake With… 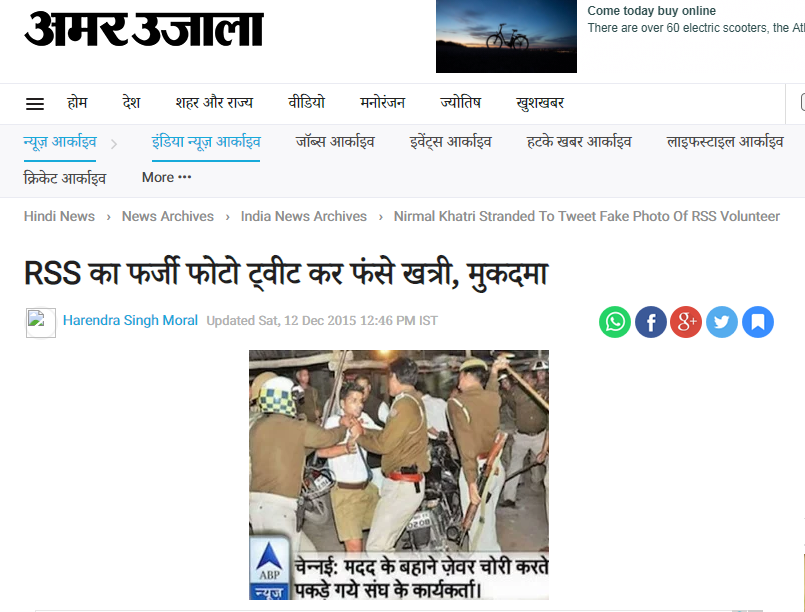 “The Agra police has registered a criminal case against Congress state president Nirmal Khatri and two others under sections 469 IPC and 66-B of the IT Act, following an uproar over a doctored picture of RSS workers on Facebook, in which they are being thrashed by the Chennai police for allegedly snatching jewellery from women during flood relief operations.

According to the complaint filed by RSS worker Ajit Singh Chahar, Khatri misused a three-year-old photo to show that the RSS workers were roughed up by the police in Chennai for jewellery theft. The photograph was of a clash between RSS workers and the police in Agra in November 2012, when the police had launched an unprovoked attack on them while they were going to the Anwal Khera camp on bicycles.

Station House Officer (SHO) Sadar Pohap Singh told India Today, that a case has been filed against Khatri and the investigation is underway. A FIR has also been registered against Manish Kumar and Mehul Maru for the misuse of the photographs. Manish Kumar had tagged Ajit Singh in the doctored picture whereas Mehul Maru had similarly misused the same picture 18 months ago, in which he had claimed that the RSS workers were being thrashed by the police for engaging in eve-teasing.

Meanwhile, outraged by the FIR launched against the Congressmen, Agra Congress president Dushyant Sharma met the Agra district magistrate Pankaj Kumar with a delegation of Congress leaders and said that the case, which was clearly filed as a part of the political vendetta of BJP and RSS against Congress, would not be tolerated. The delegation has threatened to launch a protest on the road if the case in not withdrawn.

A Fake set of photos viral as new smart fencing on our border. 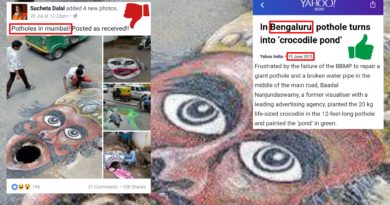 Did potholes in Mumbai led to such creativity last week ?