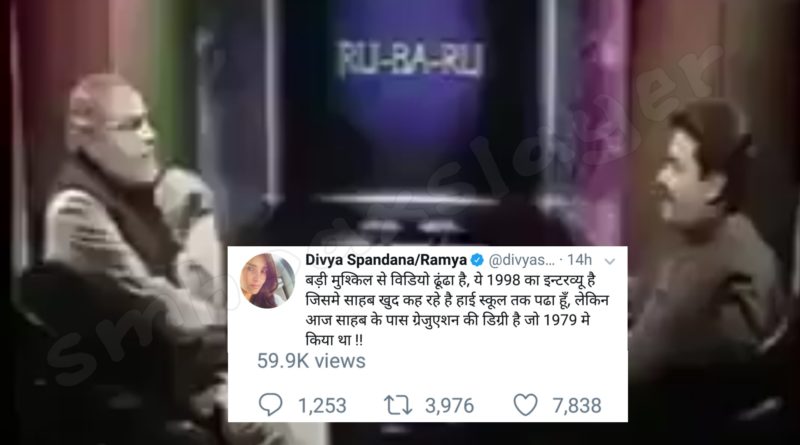 Congress IT Cell Divya Spandana tweeted an old video of interview of  then CM Narendra Modi by Rajiv Shukla in Program Ru Ba Ru. It had been retweeted by more than 4000 people by now.

Translated – Found this video after much efforts, this is an interview of year 1998 in which Saheb himself is saying that he is studied till High School but now Saheb has Graduation degree too which is of 1979.

So that’s not the entire clip! Whatsapp 🤦🏽‍♀️ https://t.co/NwfJWQcbsQ

Despite learning what she tweetd is fake, she hasn’t yet deleted the tweet which may mean she wanted to spread FakeNews which she may have successfully achieved.

While the Wrong tweet has more than 4000 retweets, her correction has only approx 350 retweets which shouts out the intention

The video she tweeted was trimmed, you can watch complete video here.

A video clip or a photo at many times may not tell you the entire real story. People use trimmed video clip or just one photo out of a set to to create Fake News.

For example there had been two such cases earlier

While in a speech Rahul Gandhi said “Narendra Modi Ji promised to farmers that “I’ll give you a machine in which you can put Potato from one end and you will get gold on the other end”. The video viral had the first part trimmed “Narendra Modi ji said”. So it gave an idea to people that Rahul Gandhi is promising such machine

The truth of the machine you’ve been waiting for – Alu to Sona !

Last year a Congress Media coordinator as Vinay Kumar Dokania claims posted a photo of PM Modi standing next to Japan PM Abe with his wife in front of Mahatma Gandhi’s bust in Sabarmati Ashram. While Japan couple were paying respect to Gandhi with joined hands (Namastey), PM Modi wasn’t, claiming him to be a sanghi and insulting him

Actually this is just a matter of time, when the photo is taken. PM Modi also paid respect but in another photo from same event

How a photo can be misused. Modi Ji did greet Gandhi Ji along with Abe.

An old video of PM Modi from Gujarat is viral as recent from Tamilnadu. 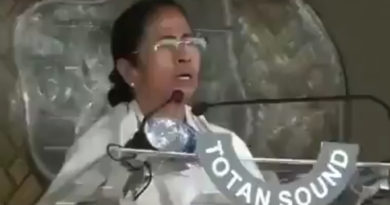 Video of Mamata Banerjee praying to Allah is clipped off a speech in which she prayed to all.

Did DMK Leader Selvakumar assault a lady doctor on COVID-19 duty? The video is 2 years old from a beauty parlour.