The warning on Equinox, causing heat wave and advising people to drink more water is viral again but this time it’s fake.

The equinox happens only twice a year, March & September, not in May

The irony is, some prankster merely changed “March” from previous viral message to “May” and people started spreading again.

“Drink more water for the next seven days (May 22-28) due to *EQUINOX*(Astronomical event where the Sun is directly above the Earth’s equator). Resultantly, the body gets dehydrated very fast during this period. Please share this news to maximum groups. Thanks”

What the weather man says to Deccan Chronicle about it –

Speaking to Deccan Chronicle, Karanam Ramachandra Rao, Director, Cyclone Warning Centre, Visakhapatnam, informed that the equinox is a general event that happens twice in a year. “Thee are two equinoxes every year — in March and September — when the Sun is directly above the Equator and the length of night and day are nearly equal. “Social media users are posting without checking the credibility of the messages,” Mr. Rao concluded. 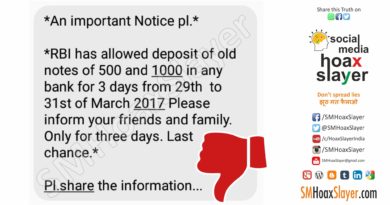 Now after Media, Will Supreme Court accept a WhatsApp image as proof too ? LOL