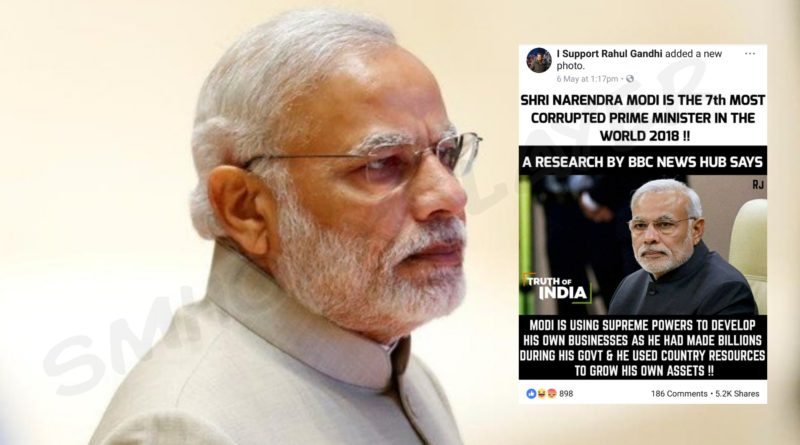 A supposedly ‘news’ article posted by bbcnewshub shared by many claims that Indian PM, Narendra Modi is 7th most corrupt Prime Minister in the world.
A Page by Rahul Gandhi Supporters “I Support Rahul Gandhi” with approx 90000 followers posted an image saying the same and by now has 5443 shares also.

Many others have also shared the same –

Our 'MODi'jee lifts seventh rank in most corrupt politicians in world, according to panama leaks,by bbcnewspoint.

The Same article was posted in March 2017 also by FoxNewsPoint.com currently renamed as BBCNewsPoint which was shared then

#Feku Chai waala Modi is 7th Most corrupt politician in the world (via BBC).

Modi named as the 7th most corrupt head of a nation by BBC. Why BJP is not protesting ???

Indian PM Narendra Modi is on 7th Position in Top 10 Most Corrupt Politicians in the World 2017.

HOW CAN SC EXPECT PM MODI THE 7TH MOST CORRUPT PERSON IN THE WORLD OUT OF 10, TO EVER APPOINT A LOKPAL?
‘What’s stopping you? SC criticises pic.twitter.com/bbUkhKX2lg

This article is fake, it’s not the genuine BBC media house but a small time website.
The bbcnewshub article says
“The 14th current Prime Minister of India Narendra Modi is known as most corrupt leader of Hindustan and one of the most corrupt prime ministers in world, he took the office in 2014 while he has served as Chief Minister of Gujarat from 2001 to 2014, as well as Modi is the Member of Parliament for Varanasi, the member of Hindu nationalist Bharatiya Janata Party Narendra Modi is using the supreme powers for to develop his own businesses as he had made billions during his government and according to media reports he used the country resources to grow his own assets.”

So while the “I Support Rahul Gandhi” says “A research by BBC News Hub”, The bbcnewshub itself only says “Narendra Modi is known as most corrupt” i.e is known as without any proof, source etc.

Further, while people fell for the acronym bbc, bbcnewshub has nothing to do with the real BBC media house.

1. The logo is not at all similar to the genuine BBC Media house

2. Their twitter handle has merely 12 followers and is not verified

3. The disclaimer on the site itself says they not 100% sure.
“But as mentioned it’s not 100% sure by authority of this site that information accurate, complete, Reliable, right along with images, photos, information, knowledge and other any type of material which are available on our website due to internet.

In other words which services we are not controlled not responsible for those but our experienced and professional teal work always hard day and night to provide exact and very correct information for the visitors of our website in organized and favorable ways.”

Which is the 4th Most corrupt party in the world ? Congress or BJP ? 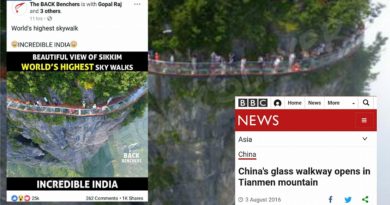 This time “The Back Benchers” import a mountain from China to Sikkim. 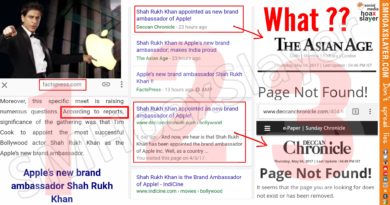 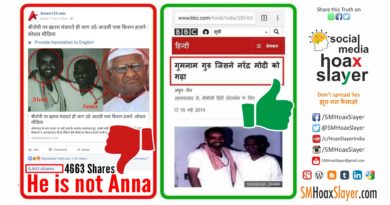