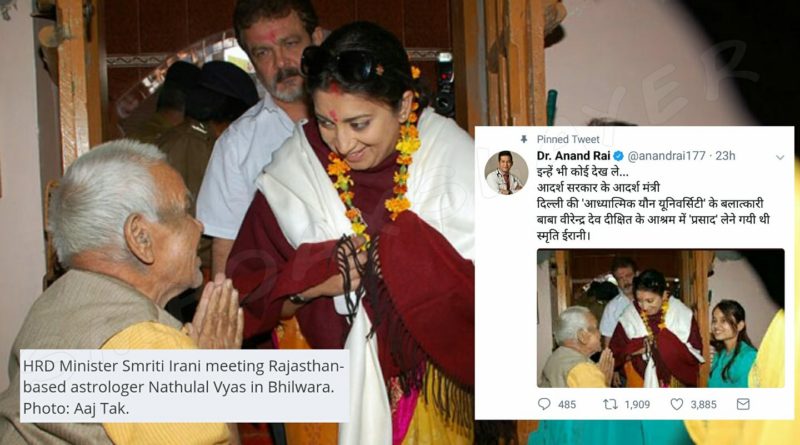 Anand Rai tweets a photo of Smriti Irani meeting someone claiming him to be Virendra Dev Dixit who is recently caught for sexual offense running an ashram,

Astrologer to Smriti Irani: You will be the President of India one day

Human Resource Development Minister Smriti Irani was told by a Rajasthan-based astrologer on Sunday that she is destined to become the President of India in future.

The 38-year-old minister was on a visit with her husband Zubin Irani to Karoi village in Bhilwara, Rajasthan, where she met Pandit Nathulal Vyas. The same astrologer had predicted a bright career and big post for Irani in her political career before she became a minister in the NDA government.

In her four-hour long meeting with Vyas, Irani reportedly asked several questions on her political and personal future and also thanked the astrologer for his correct prediction.

When asked on Monday about the meeting, the HRD minister was dismissive. “I realize I contribute to your TRPs and I am glad I could be of help,” she said.

“What I do in my personal life doesn’t come under responsibility of media. I appreciate your efforts to keep me in the headlines,” Irani said.

An interesting story from Irani’s past goes that an astrologer had once dismissed her of having any good future and doing something worthwhile. The budding television actress had confidently told the astrologer to check on her 10 years down the line.

With her meeting, Irani, who has often been accused of pandering to right-wing groups calling for a revision of India’s education system, may have given further fodder to her detractors.

Janata Dal-United leader Ali Anwar was quick to quip. “The next time I meet her, I will recite this couplet: Haathon ki lakeeron par itna na aitbaar kariye / naseeb unka bhi hota hai jinke haath nahi hote. (Please do not have so much faith on the lines of your hands / People who do not have hands also have fates),” he said.

“It is not right that the person who should be campaigning against superstitions, the same education minister is spreading myths,” Anwar added.

BJP ally, Shiv Sena’s Sanjay Raut, on the other hand, defended the minister, “Astrology is a shastra and anyone is welcome to believe in it. There’s no need to make a mountain out of a molehill.”

This is a ‘fake government website’ providing Rs. 50,000 financial aid

No,’Pakistan Zindabad’ was not chanted in Mumbai as viral messages claim. 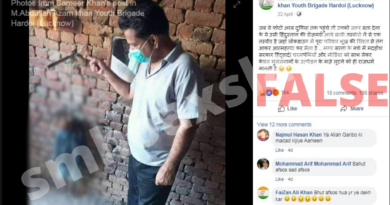 Did hunger during lockdown cause this man to kill his son?