A terrifying but fake video of the ride Gyro Drop from Lotte world South Korea started circulating on the internet which fooled almost everybody who viewed it.

This particular video was CGI edited to make the ride seem more terrifying than it actually is. In the video, you can see an extendable arm coming out from the top of the ride which extends up to almost double of the original drop height. As the ride commences and the movable section goes up, the seats drop down held together by bungee ropes. The whole ride starts rotating in circles thus swinging the seats before eventually retracting the riders back to their positions and then it falls down.

The video was shared extensively on social media by various influencers.

😱😱Gyro Drop got twice higher than before… I believe anyone can ride it though.-(c)lotteworld👍🏼👍🏼 Hit Like for more Videos☝️

What is the Truth?

While the Gyro ride is, in fact, an actual ride, but it is much less terrifying and exciting as it had been made in the circulated video. The original ride comes equipped with virtual reality goggles that provide the riders with an exquisite vision of a landscape during the drop. But apart from that, the ride is a pretty plain one. There exists no extendable top or detachable seats held by bungee ropes. The dropping speed of the ride is 142 miles per hour.

About the park and the ride:

Lotte World’s Magic Island is an artificial, man-made island situated on a lake located across the street from the main amusement park. As mentioned in the park’s official website, individuals have to be less than 6 foot 2 to take the ride. This ride has a capacity of 40 people per ride.

The fake video of the Gyro ride quickly made its way all over the internet on various social media sites like Twitter and Facebook. It is also quite famous on YouTube as well. These fake videos have received huge acknowledgment and many people have shared it and liked these videos.

Would you ride the Gyro drop?

Would you ride the Gyro drop?www.fabmedia.co.uk

“If this “Gyro Drop” ride in South Korea was like this, I would have definitely flew out there to try it…. at least once” — @KingJayforce.🎡 🎪🤹🏼‍♂️🎭🔥.

The gyro drop in lotte world is on another level of scary 😱pic.twitter.com/Qb7UrBhmcu 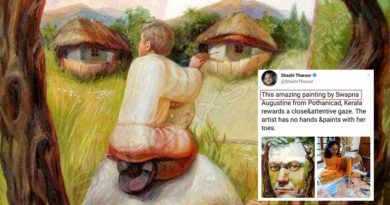 A Farrago of Paintings by Shashi Tharoor !

A video from Bangladesh is viral as violence in India as voting results.